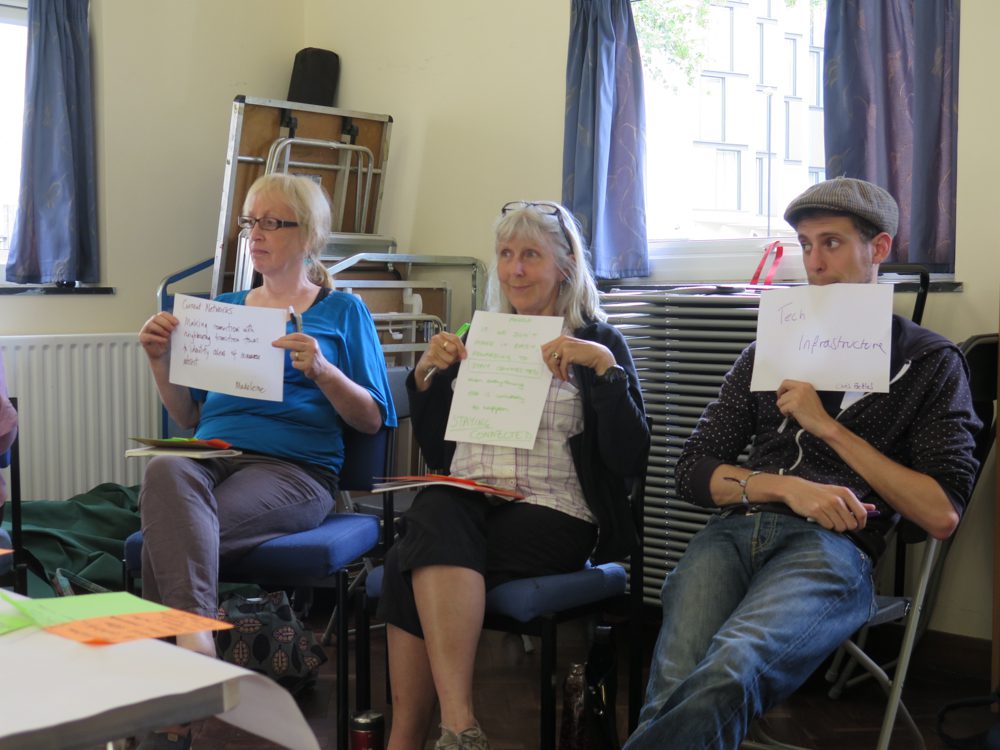 The final in our series of blogs sharing learning and resources from our experience of running regional network workshops across England and Wales.

Over the last four blogs we’ve looked at who came to the workshops and what their proudest moments were; we’ve explored how groups thrive, what holds them back, how Transition sits within local networks as well as themes and roles for connecting regionally, common across all workshops.

But how do we take first steps towards working together regionally? How do we make this conversation realistic and, perhaps most importantly, useful?

Step 1: Give and Gains 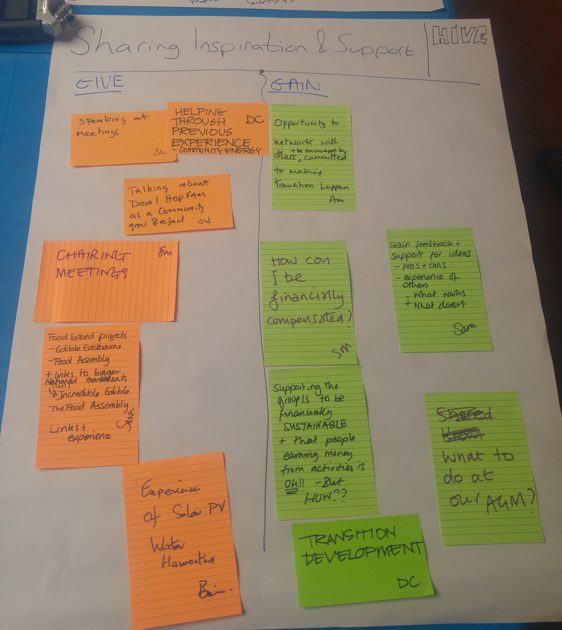 In each workshop, participants developed key themes which became our focus as we shifted gear into “making it happen”. Participants asked what they could personally give and what they may like to gain from each key theme. We were appealing to each person at the workshop to exercise their own judgement to decide what might practically happen following the workshop. To do this, we used a process called “Give and Gain”.

The Give and Gain process was taken from Playing for Time: Making Art as if the World Mattered, a workbook by Lucy Neal on creative practice in action on climate change and community sustainability. The process creates a shared beginning for a group coming together for the first time on a project and empowers each individual to be both teacher and student, teaching or learning in an area they are passionate about.

Remarkably, across the 10 workshops there were 411 “gives” or offers of expertise and 319 “gains” or offers of learning towards the chosen themes! It was fantastic to see how this task was honestly and realistically approached. We  looked to see if there were some direct matches in the “Gives” and “Gains” to spot some quick wins. Indeed there was… social media teaching was paired with a desire to learn at most workshops; introduction to permaculture workshops were matched with those curious in Berkhamsted; beginners in repair cafes were linked  with emergent local repair cafe networks in the West Midlands.

What might happen next with the Regional Network? Of all the themes explored, which would be the one each participant would feel compelled to take to the next stage? Self-organisation was key and each participant was asked to write down which of the themes they would spend time on. I loved this bit, trusting that after 4 hours working together, each group would form organically and conversation would begin easily.

Working groups appeared on planning more regional gatherings with different focuses in the West Midlands, working on a shared story, a bigger picture in London, collaborating on projects together such as an edible green route in the South West.

So what really happened next?

Since the workshops, regional networks have emerged. Facebook groups have formed allowing sharing of projects and callouts for participation in events. For example, Transition Resonate (East Midlands Network) and Transition Buzz (Berkhamsted Network) both give space for networks to grow.

We have been able to offer support  to these emerging networks through The Great Invitation – a project to create space to invite people to join in, amidst the multiple drivers of Extinction Rebellion, Youth strikes for Climate, Council Declarations of Climate Emergency and so on and so on. 2019 is looking like a year for celebrating the diversity of movements within which Transition plays a big part. 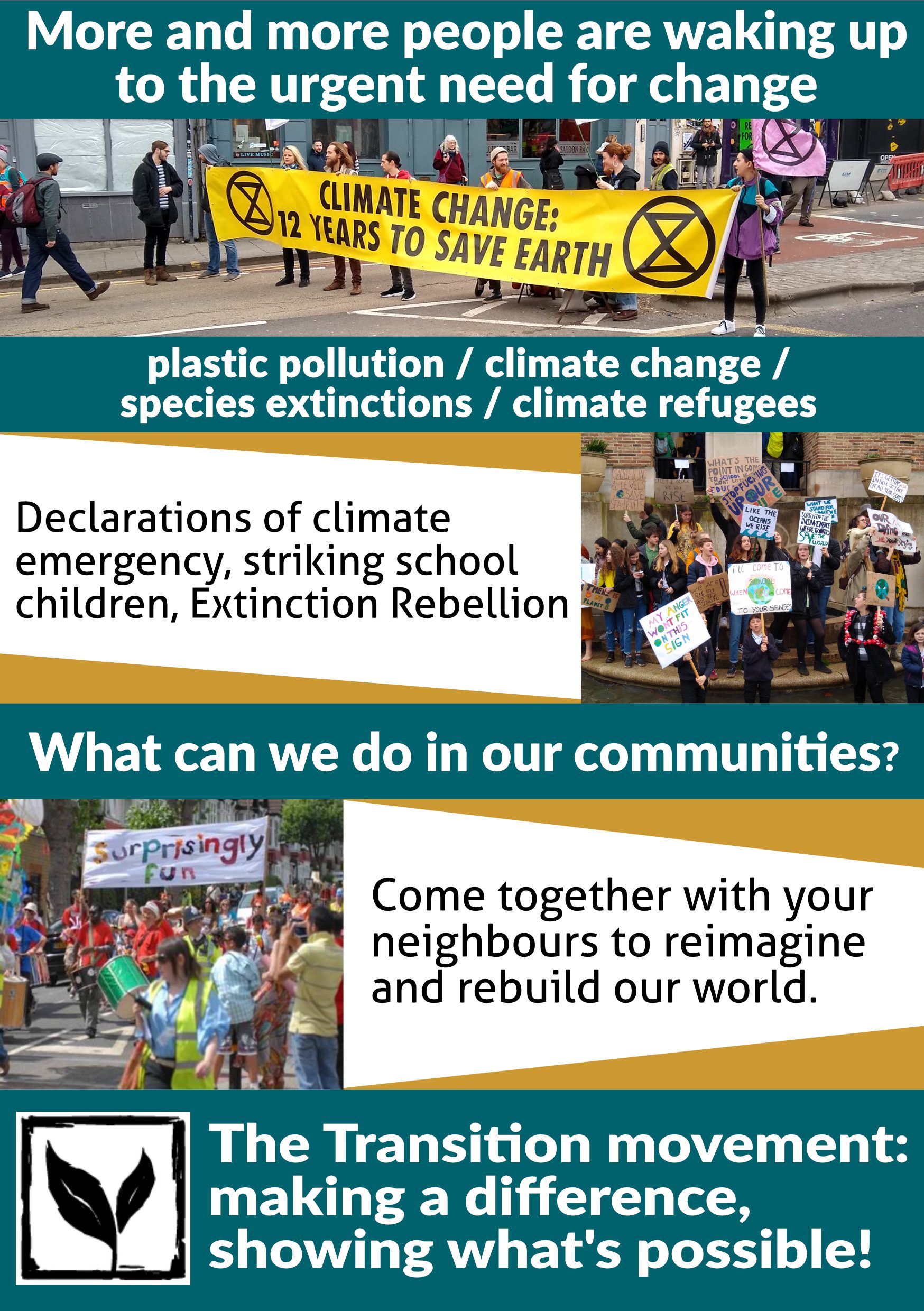 The Great Invitation has engaged networks in Cornwall, Herefordshire, Wiltshire, Liverpool City Region, Hastings and surrounds, Southampton, London and the West Midlands. Activity has become more focused on regional need, responding to what’s going on in each place. Great examples are connecting Herefordshire County Council with Parish and Town Councils, putting energy and capacity into Sustainability on Sea in Hastings and simply creating resources such as leaflets, zip up banners and maps in the Liverpool City Region to be used at multiple events in the coming months. All of these say loud and clear that local action is part of a much bigger story of transformational change.

The conversation around, and development of, Regional Networks is very much live with our new funded program. The National Lottery Community Fund is supporting a focus on 5 areas of work: network building, thematic networks, inclusivity, developing Transition hubs and research to share learning well.

We’ll keep blogging as the project goes on and we’d love to hear your comments and thoughts.

Stepping Up and Reaching Out – Themes and Roles

Regional networks help groups to create a larger narrative a...